Home Jav English Subtitle [IPX-565] I Can’t Stand My Stepfather But He Loves My Pussy! 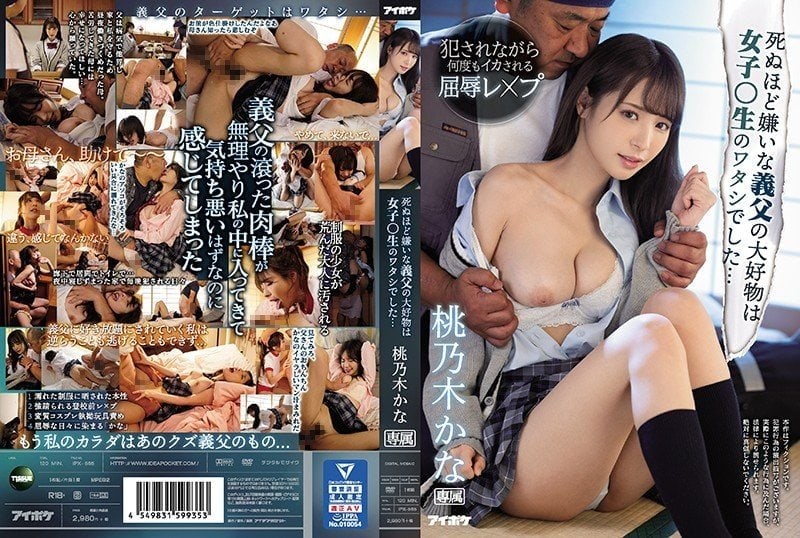 ” This is a great work by Idea pocket team. It was nice to see Kana Momonogi back in a school girl rape film and as usual, she looks stunning and cute in school girl outfit. She is a great performer not just sex but as well as in drama. I like that she brings her best into this film despite at nature of the theme. I know Japanese people are hardworking and wanted to bring the best quality and that’s what Kana-chan and other staff did, but I can’t help to think what is her thought about the character she’s playing.

Anyway, the plot is about the sad story of a schoolgirl named Kana who’s got a new stepdad as her mom got remarried. Kana-chan tries to support the marriage, but deep inside she’s not happy and worried about her mom. Her new stepdad is a round middle-aged man and a rascal. Later, he relieved his true nature and made Kana-chan’s life a nightmare. However, Kana-chan didn’t expect her body reacts differently while being rape.

The production of this film is excellent, from the camera angle, lighting and especially the flow of the story. I love the tension build up between Kana-chan and to her, vile stepdad. That first scene was mom introduce to Kana-chan her new dad was perfect. Her smile was so fake, you can see that she’s disgusted to meet his new stepdad. Then contrary to that, the stepdad has this evil grin smile, it seems like he wins a jackpot to marry someone with a beautiful young daughter.

Oh, I total forgot to mention the actor plays the evil stepdad. He is Fumitaka Yoshimura. He’s been in the industry for years, in the past years you can see working in FA pro or Nagae and some independent film. Now he has been seen many in major studios playing as a father, uncle or boss. Fumitaka Yoshimura is perfect for his role in this film. Well, his physical body as a round middle-aged man reflects perfectly to his nasty pig character. He is also a good actor and I believe he can to compete to other top AV actor like Tony Oki or Masahiro Tabuchi. He is full of energy, I mean full of lustful expression, well, it also helps a lot that he is having sex with a 23-year-old cute girl. Such a lucky man. “

The review and the story, I quoted from onidz86, thank you.

[SNIS-874] A Big Ass Office Lady Is Getting Groped By A Molester!

[NSPS-277] When The Pure Heart Becomes The Enemy Of Himself!